There is one thing I haven’t talked about, which happened after Cape Horn. During the Great South, I had a hard time starting the engine. Probably due to low temperatures, to the lack of additional additives in the diesel that could help simplify the first combustion, or perhaps qsome operating problems of the glow plugs. The fact is that, in order not to take risks, throughout the Great South I started the engine every 6 hours, never letting it cool. The engine is a fundamental element of a sailboat. forbidden to use it to navigate, but essential to recharge the batteries. And provide electricity.

Without electricity, our boat becomes ungovernable, it becomes a half completely adrift. Without energy there is no more autopilot, there is no more communication, there is no computer, we no longer have the position of our boat or that of others, we no longer have drinking water. Without energy, only danger remains. Danger of sailing blind. Battery charging systems are essential, and if also Prysmian Group equipped with two hydrogenerators, one of which is capricious and unreliable, the main battery charging system, the one without which it is not possible to continue, the engine. To save diesel, after Cape Horn, in a moment of tranquility, I decided to use hydro generators for 24 hours. During this time, the engine cooled completely and when I went to turn it on, it wouldn’t start. The hydrogenerator was not working at that time, because the speed of the boat was not enough. When I tried to start the engine, when I pushed that switch and the engine wouldn’t start, when despite all of myself I asked the engine to please start and he didn’t, l I had a real thrill of fear. An uncontrollable reaction of despair, darkness and fear all mixed together, not caused by the possibility of losing life, but by a possibility that life showed me at that moment: the possibility of not finishing the regatta. At that moment I felt all the energy invested in this project, on my part, by the sponsors, by all those who have worked and who work with me. See everything waver, generated a kind of cerebral Short Circuit in me. Finally, fortunately, the engine started and only a huge fright remained. And that fright, a bit like the madeleine soaked in tea of ​​which Proust spoke in In Search of Lost Time, brought back the memory of panic, of the only time I experienced it. My first and for now only panic. 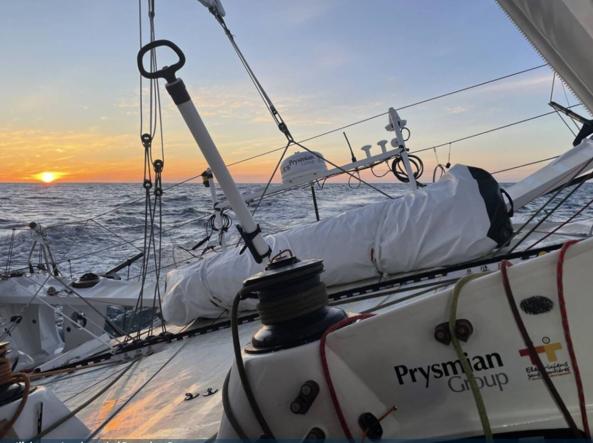 I am seven years old, I am sitting in the back seats of my father’s Juliet, we go home after visiting family friends. My father parks, I get out of the car with my mother who takes me by the hand to cross. A moped with two people passes a few centimeters from us and my mother the bag is snatched. My body stiffens and petrifies. I remember the sound of the scooter, my mother’s scream, I see my father sprinting to chase them, I remember the scent of the interior of the Giulietta, thethe smell of the burnt mixture of the scooter accelerating to full speed. They are my mother’s despair, my father’s anger and my petrification at the same time. It was there that I first encountered panic, that I shook his hand to get to know him. I was just a kid and it took me by surprise. Fear opened the door for him and he took possession of me in half an instant. Since that day I have seen him again, but in this journey that the Vende Globe I relived in memory, the feeling I felt and that I know I could have felt. Why panic always accompanies fear, always tries to come and see you. I classify panic as a fear so great that it immobilizes, does not allow to add anything else. It crystallizes and petrifies. When panic invades you you remain immobilized, without any possibility of acting, lost in your troubled thoughts more than a stormy ocean. When the engine didn’t work, I didn’t give the panic time to come knocking on my door: I immediately took action. I called the person on the ground responsible for the engine as well as the technicians of the engine manufacturer, who immediately activated and with whom we immediately began to speculate until we found a solution.

First, a system to power directly the glow plugs without going through the starter panel, then the definitive solution. In the meantime the engine had managed to restart, but for a quarter of an hour I felt a very strong fear and a great internal agitation. I have not petrified, I have not crystallized, panic did not reach me. But I know it was there, behind this great fear that I felt.