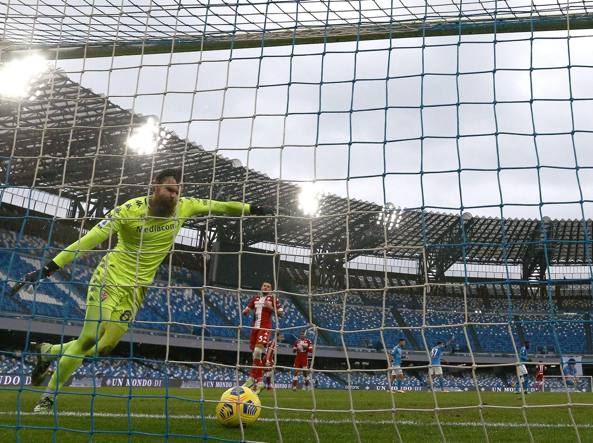 Fiorentina overwhelmed, against Napoli ends 6-0. The hosts start strong and immediately pierce Fiorentina culminating in a good choral action. Insigne, taking advantage of a bank of Petagna with his back to the goal, kicks at the far post. More precision than power, Dragowski can do nothing. Prandelli’s team doesn’t fit in and doesn’t lose heart. Keep pressing and build two sharp actions. First a shot by Biraghi, deflected by Demme, crashes on the crossbar. Then it is Ospina, with a quick dive, to block a shot from Ribery from close range. The purple offensive does not end, Biraghi has another opportunity but his diagonal shot ends just outside. But at the best moment, Napoli is doubled. Fiorentina loses a poisonous ball in midfield, a blue counterattack and Demme transforms Petagna’s precise pass. It is the knockout blow that paves the way for the third goal. Insigne does what he wants ball and chain, skips Amrabat and Milenkovic and serves Lozano alone in front of Dragowski. At the end of the first half comes the fourth goal, with a conclusion from a distance by Zielinski.

At the start of the second half, Prandelli leaves Ribery out and immediately send Kouame into the field. Despite the heavy passive, Fiorentina tries to save the honor. Napoli, strong of the wide advantage, relaxes while Gattuso screams to raise the attention. Vlahovic goes close to scoring, Koulibaly saves the ball just before it crosses the line. But twenty minutes from the end there is also time for a penalty for the Azzurri, Castrovilli knocks Bakayoko out after a save by Dragowski on Insigne. The captain of Napoli goes to serve, the goalkeeper senses the direction of the ball but fails to stop it. At the end everything also scores Politano after a serpentine between the purple players. In the stands to witness the defeat also the patron Rocco Commisso who after the story of the Franchi stadium received another disappointment in a few hours. The next round, against Crotone, will close the first round of the championship. For Fiorentina it is already time to look forward.

«I apologize to our fans: aWe lost 6-0 and got no yellow card ». Cesare Prandelli says so, after the collapse of his Fiorentina at Napoli. «The third goal, with Insigne making a slalom between five of our players, is the emblem of our match – said the Viola coach to Dazn – It’s absurd. Now we just have to shut up and work. ” “It is sensationally difficult to explain – added Prandelli – We are in the lower part of the table, and from there we cannot always think only of building games”. ‘What will I tell the team tomorrow? Nothing, I will show the five seconds of that action, with Insigne in the middle of five free to act … », added Prandelli. “Days like this can happen, they also happen to big teams: but real men know how to react and get up again”. Prandelli also spoke of the words of Giancarlo Antognoni, who before the match in Naples had not closed the doors to possible interventions on the market, in the face of the hypothesis Papu Gomez or Pato. «With his crystalline class, Antognoni is able to identify the profiles suitable for this team. But right now it doesn’t seem appropriate to talk about the transfer market, I have to think about working on the team ».