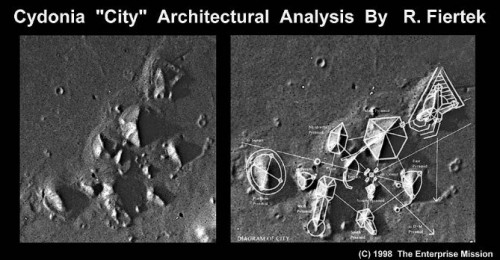 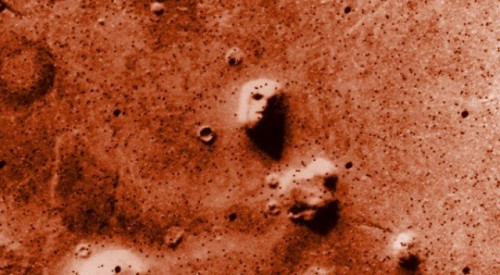 The Sphinx and the pyramids of Cydonia, discovered on the planet Mars as early as 1976 by the Viking 1 probe, continue to make researchers talk. Although the analysis of the images of the face of an alleged sphinx and a number of pyramids have been analyzed for decades with disappointing results for those hoping to find signs of civilization, there are still researchers such as those of the Journal of Science Exploration who once again renew the hypothesis of human artifacts. Let’s go into detail. The famous “sphinx” measures approximately 2.65 km in length and 1.8 km in width. It would be a gigantic artifact like there are none on Earth and the same goes for the pyramids grouped to form an alleged city not far away. I would say a city of giants because their measurements are on par, if not even exceed, those of the Martian sphinx, such as to make the monuments of Giza appear the work of Lilliputians. 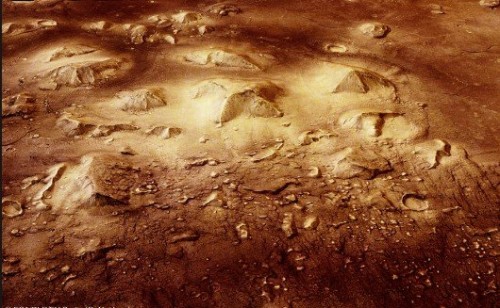 Over time, researchers have developed countless maps of the area and discovered symmetries and geometric correspondences which, however, do not reveal the mystery and explain nothing to us about the possibility of belonging to a human civilization. However, I believe that the researchers have made a mistake by letting the detractors always lurking, fielding the usual hypothesis of pareidolia which for decades has been the useful screen behind which to make inconvenient evidence disappear, especially on Mars. It is undeniable that at that latitude, on the Red Planet, there is something anomalous, something so evident and so extensive that it cannot be ignored or dismissed with the commonplace of pareidolia. However, it is necessary to understand what or who produced those presumed constructions with such precision and symmetry. I hazard a hypothesis that was already formulated years ago by some researchers for the “sphinx”. Given its configuration and the evident regularity and symmetry it could be a collapsed dome. A dome under which individuals of an unidentified civilization had built a base. The same could be true for the alleged “pyramids”. They too collapsed domes under which an alien civilization had built huge space bases then abandoned thousands of years ago, or the last reduced of the Martian civilization where a handful of survivors tried in vain to survive after the disintegration of the planet. Researchers scramble to search for hidden messages hidden among the geometries obtained sometimes even with abstruse calculations. 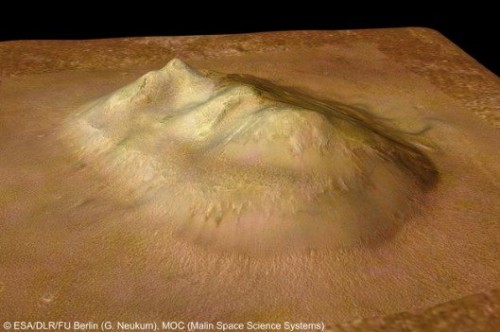 However, as the good McLuhan said, never as in this case, the medium is the message. Therefore these huge heaps, I would say better, mountains, must be analyzed for what they are and for what science allows us to know. In fact, it is not certain that they were created or realized all at the same time, but they could be the result of a natural process that lasted millennia or, likewise, of an overlap of successive civilizations on the planet in time immemorial. As a Cartesian, I believe that nature already designs by itself geometries that we humans consider sacred (and perhaps they are …) but it is enough to observe the golden section expressed in the form of any snail to realize that nature already contains within itself the number. Whether it was humans who adopted it or nature showed it to us is difficult to prove. For now we only know the surface of Mars, to the same extent (alas) as the surface of the Earth in which we have – it seems – always lived. However, already on its surface the satellites in orbit have revealed the presence of structures that it is difficult to define “natural”. We have barely a smattering of what might be hiding in the depths of the Red Planet, but this limit distorts any possible interpretation of what emerges on the surface.

It could hypothetically exist a Martian Agartha and the related civilization that developed in the subsoil that is hidden from our eyes as well as the terrestrial Agartha of which Admiral Byrd and perhaps, years earlier, the Ahnenerbe explorers witnessed. Until now, NASA rovers have barely scratched the surface of Mars but they have told us nothing about the caves and abysses that could be hidden among the ravines. They have provided us with numerous images that suggest a human presence not very distant from us from the temporal point of view, even though scientists are scrambling to exclude the presence of elementary life in the foreshortening of the last five million years or so and look for the vestiges. of organic life fossilized among its rocks. However, this is a superficial research in the true sense of the term, precisely because it is carried out on the surface of the planet. What Mars hides inside it is not known for now and could reserve unexpected truths in the future. But let’s not blame ourselves too much, since we still know little or nothing about the subsoil of planet Earth …