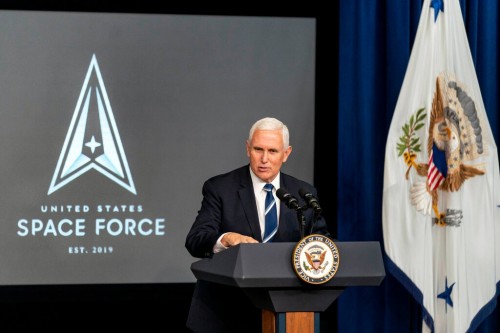 To close this wretched year, I’m giving you a nice homework assignment in the form of a bUFO debate. The argument is the new American initiative, better than the outgoing president Donald Trump, to give life to a force that will have to deal with the defense against attacks from space. On December 20, Vice President Mike Pence first cleared the name of the “troop” – they will be called Guardians, Guardians -, then formalized the motto (Semper Supra) and finally indicated the names of the first components: the head of operations will be the general John Raymond. The Space Force, the sixth US force and the first established since 1947, will be assigned in the initial stages to the control and monitoring of orbital space, in support of the other branches of the Pentagon. There are those who also made fun of the name, because Guardians of the Galaxy is a series of films inspired by Marvel comics. However, as “Il Giornale” writes, “the enlisted personnel (the project foresees about 16 thousand units) will be trained in orbital warfare, electronic warfare and military strategies. The goal is to have an organization capable of controlling the US space infrastructure and protecting it from physical, electronic or digital attacks: tackling anti-satellite missiles, electronic weapons and cyber attacks. The choice to establish the Guardians is indicative of the desire to maintain military supremacy in a disputed domain. Although the US controls most of the satellites that orbit the earth, 1,007 out of a total of 2,218, Russia and China seem willing to recover the gap from the stars and stripes adversary ”. But my question for the debate is another: is this only the purpose? Isn’t it that Trump, now that he is preparing to leave the scene, is about to reserve the fateful announcement for us? The word is yours, If you want some more details, click on this link.