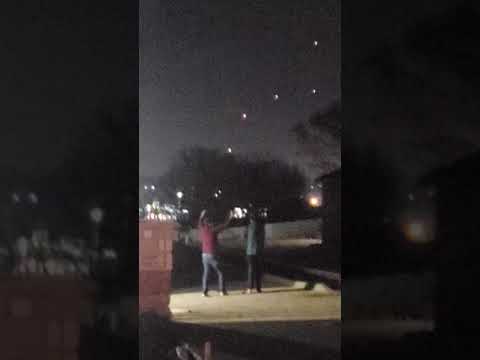 Strange lights come back in the night sky. Lights that are first static but then move and in some cases even seem to dance. The merit of the new sighting (however curious and spectacular, regardless of its real nature) is due to Dylan Wesley, a citizen of the Texan Forth Worth (near Dallas and in the area where there is the intercontinental airport). On February 27, together with the neighbors, he attended the show that is documented by this video then put on Youtube. The case is the classic one of the moving spheres, which during the day are white tending to milky while in the dark of the night they are real lights. Cases like this are no longer counted all over the world, whether the event occurs during the day or whether it has early morning, dusk or sunset as its scenario. Even in Forth Worth the lights seemed still, but then they moved albeit at a slow pace (while at times they proceed in jerks). It is undisputed that the first thing you think about is that they are balloons (but so illuminated?), Or drones, or helicopters (but there was no noise typical of these aircraft). And the question of Chinese lanterns also seems excluded, also because they have a different color. However, this is the testimony of Dylan Wesley: “They weren’t Chinese lanterns because the objects went up into the sky quickly and stopped in this formation. Sometimes they moved slowly and then disappeared one at a time. Were they drones? This is limited airspace, there is an Air Force base 3 miles away and the airspace is off limits. I lived here for a year and have never seen a drone, let alone 5 still in the sky and with the lights on ”. Something very similar was later spotted by a passenger on a plane flying over the Bay of Bengal. The episode dates back to 2017, but the author of the video claims to have waited on purpose to publish the video pending other and similar testimonies. At this Segnidalcielo link you will find the whole story. What do you think about it?